On Wednesday the 15th of February, we were heading to Helsinki to visit the people behind MAKIA, Telakka and Suomen Tekstiili ja muoti. The first place to go was the Telakkaranta, where both MAKIA and Telakka were having their offices. I had never been in the area of Telakka before, and it was such a beautiful and inspiring area to work in. The buildings of the old harbour worker district were absolutely fascinating, the kind of industrial buildings I’ve always wanted to live in, actually. And one fun fact is that the guys of Madventures had their office in the same building as MAKIA and Telakka. Unfortunately, we didn’t see them on that day.

First, we had a meeting with Totti Nyberg from MAKIA. We were served coffee and tea, and Totti began to tell the story behind the company. MAKIA was founded in year 2001, when Joni Malmi, Jussi Oksanen and Ivar Fougsted decided to start a clothing business together. It started as a very small project, and it had some difficulties especially in the start. Joni Malmi kept going on with his vision, when the others didn’t, but then Jesse Hyväri joined in. Later Totti Nyberg followed and so the story of MAKIA continued. They have had some difficulties on the way, for example with the quality of the products, but they have solved the problems.  Now the company has 11 people working in the office.

In 2015, MAKIA cleaned up the brand image by bringing up the new era of MAKIA 2,0. It was more commercial than the previous style of MAKIA. The logo changed, and the collection was optimized, and they even had their own champagne made, as a symbol of growing up from beer drinking skater to a more sophisticated skater. Totti Nyberg said that the cleaning of the brand image was a huge risk to take, but it was worth taking. The sales have grown since, and the company has 325 shops around the globe selling MAKIA products. The International growth has been great, and the most important countries in sales are Italy, Spain, France, Denmark and of course Finland, just to mention few.  The real turnover year for the company was 2016.

MAKIA is about approachable clothing for a wider audience, with a Nordic, contemporary twist.  The clothes are made to endure the weather, and that they could be worn in the everyday life. MAKIA is really focusing on making quality items, so that they could be used for years to come. The idea behind the MAKIA clothes comes from the background of skating and snowboarding, but the clothes are made more classic and casual. Like Totti said, that the clothes are for the skaters, who have grown up. MAKIA focuses a lot on visual things, such as good photoshoots, and creating the right mood to the products. They also have an Instagram account, where they share the kind of lifestyle they want to represent. When seeing, and feeling the clothes of MAKIA, you could really sense the whole idea of the company.

After the meeting with MAKIA we were heading to Telakka, which was just upstairs of the same building we already were in. There we met Kirsimari Kärkkäinen, the owner of the company. The office was a big, beautiful and light, and it was actually the dream of Kirsimari Kärkkäinen before she actually started to run a business in there. Now they have been working 6 years there. 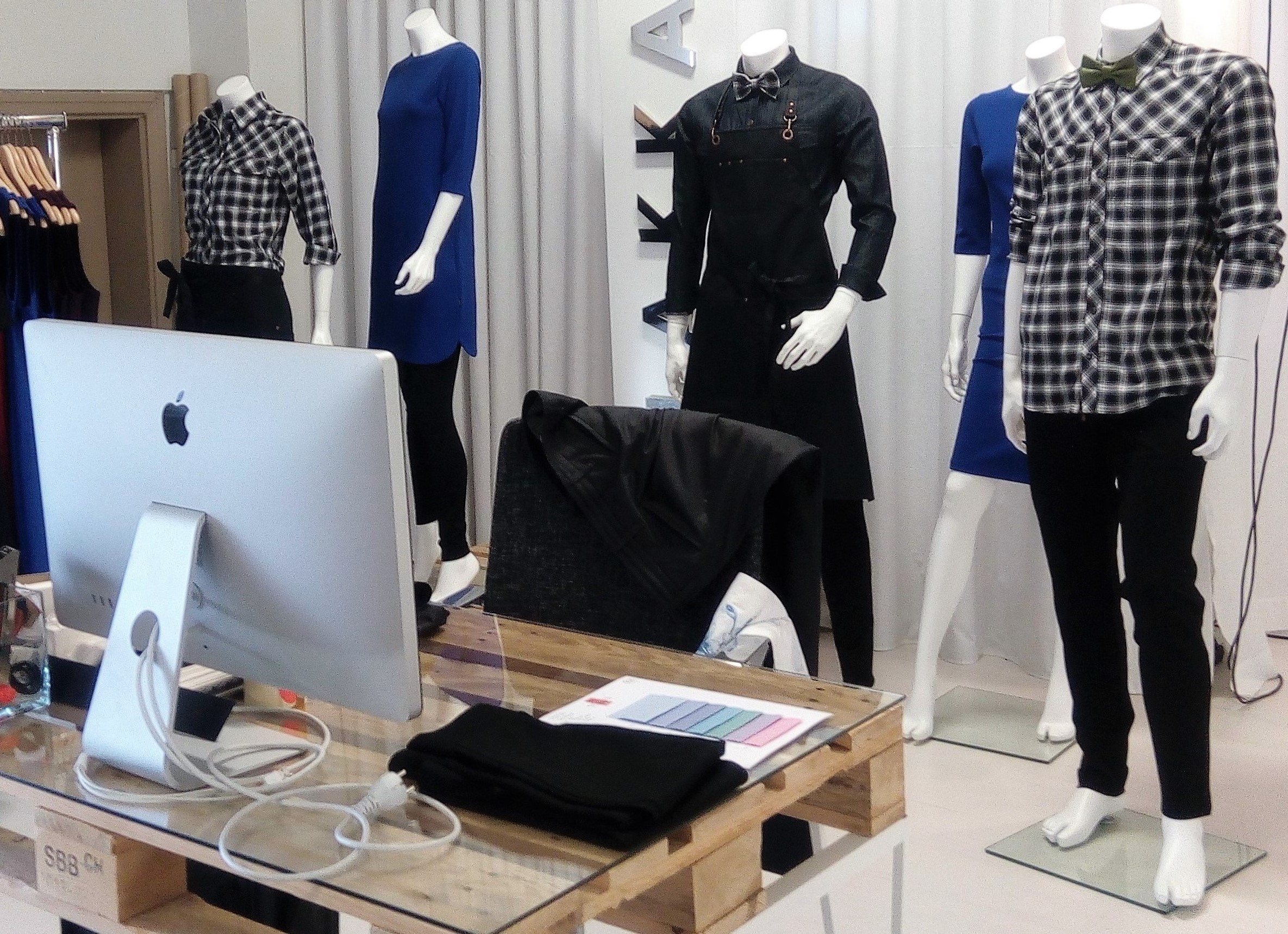 Telakka is focused on designing work clothes for different companies, such as VR, Kirkkohallitus (The Evangelical Lutheran Church of Finland) and Posti, but Telakka is designing mainly for restaurants. The workwear of Telakka is at the same time functional, but it also looks good. Kirsimari Kärkkäinen said, that the workwear is not about fast fashion, but it is meant to last for a long time. Telakka is aiming on good, functional products, that also look good. They have separately women’s and men’s clothing, but not that much unisex products. The Materials that are used in the clothes are from Europe. Some of the products are made in Finland, but mainly in Estonia.  Telakka is also attending to a different kinds of workwear fairs from time to time. 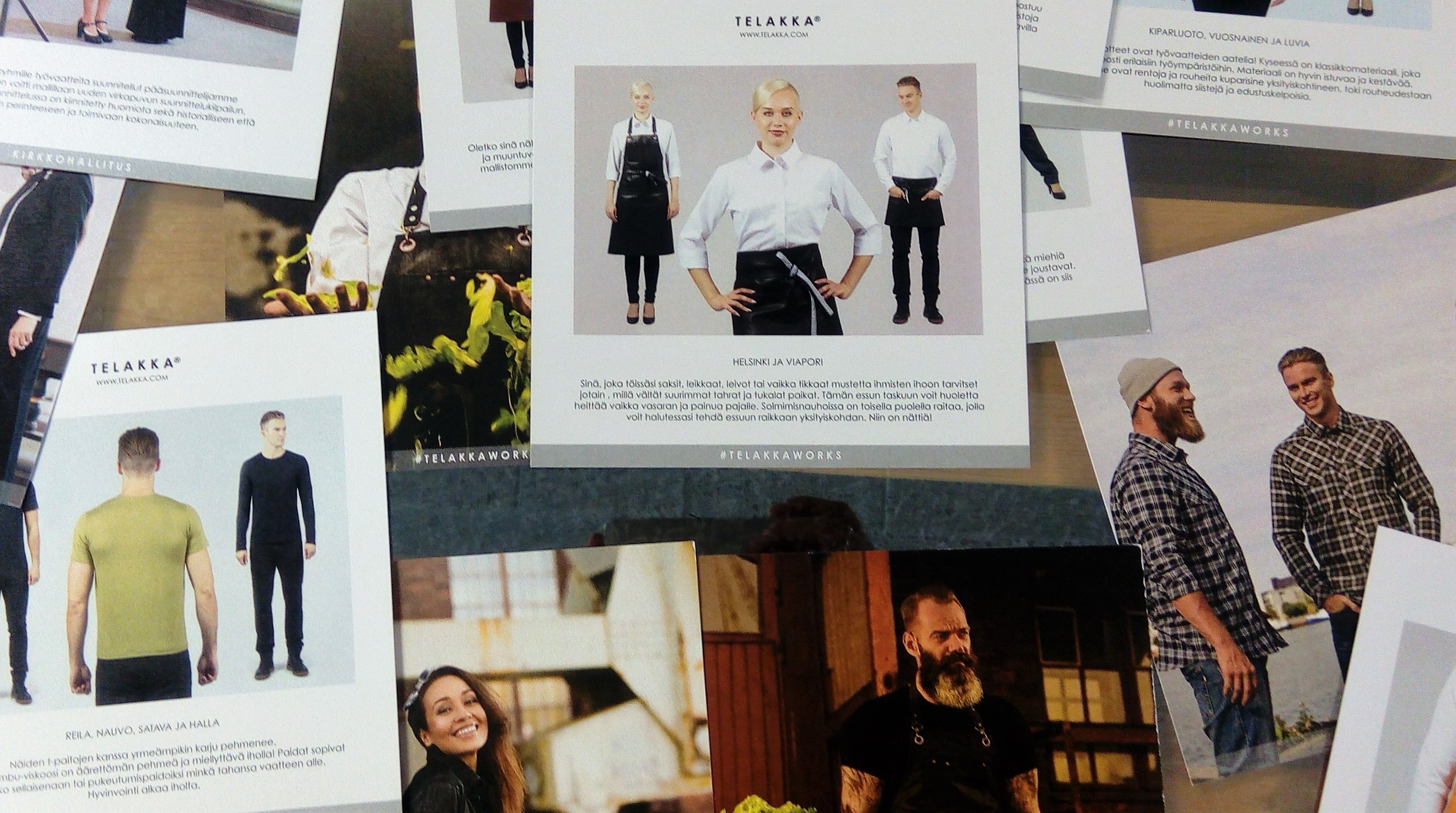 It was really nice to see good looking workwear, when visiting Telakka. Even though the most important thing in the workwear is the functionality, I think it is also important, that it looks good, and that the people wearing the clothes are feeling comfortable and confident. The designs in Telakka sure looked good, for example the female priest outfits they had been working with. The workwear area was a whole new thing for me, but after visiting Telakka, I definitely got interested! /Amanda

We were welcomed by Anne Ruokamo, who works as an adviser for international affairs at Suomen Tekstiili ja Muoti ry. She told us that the organization is 111 years old, but it has been renewing a lot lately. At the moment it has about 120 members and the members range anywhere from fashion, work wear, interior and health care textile fields. The members of the organization employ around 5000 people and the sales revenue of the members was around 1.1 mrd euros in 2014.

The usual issues that the Suomen Tekstiili ja Muoti ry act on are labor issues and property rights. They help their members to find suitable partners and factories and they also have financial advisers. Even a stealing of a brand has happened before and the members can seek for legal advice from the organization. As an example, Minna Parikka’s designs have been sold in China with the same name without the consent of the brand. 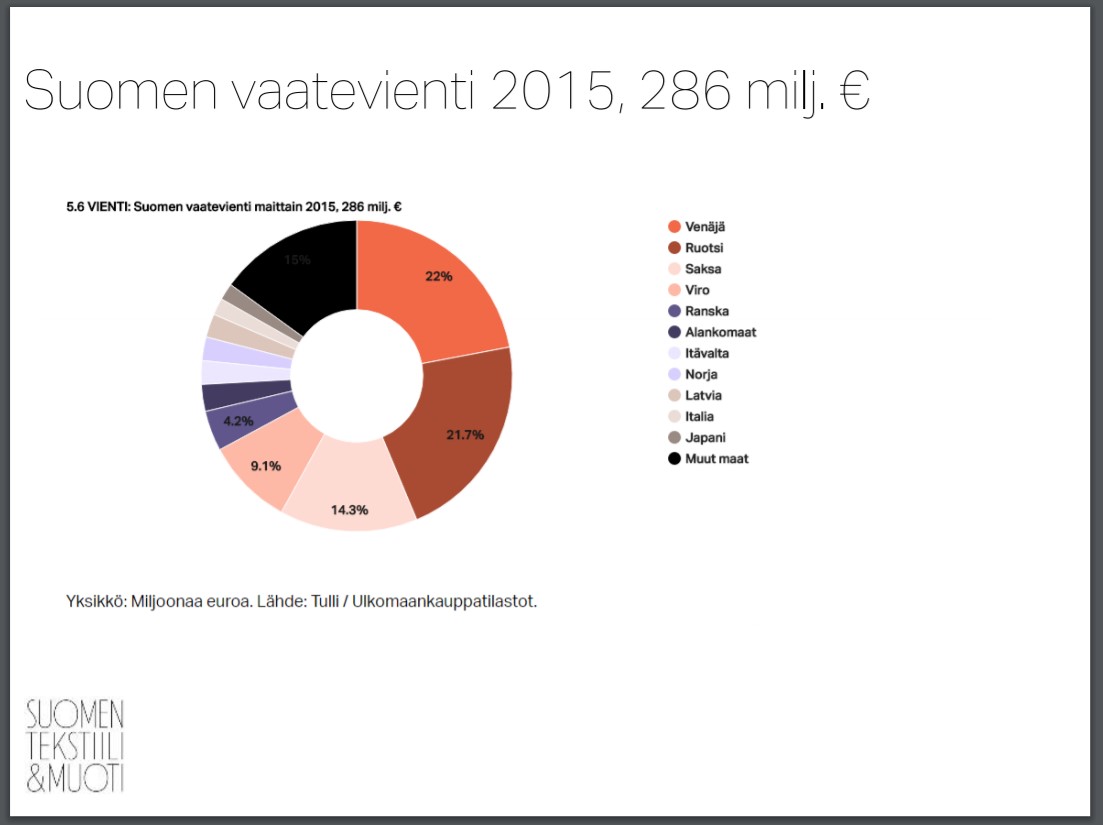 Ruokamo showed us two diagrams that have interesting information about the Finnish textile industry. The first diagrams shows us the exportation of Finnish clothing goods in 2015. According to this, Finland exports mostly to Russia, Sweden, Germany and Estonia. The entire exportation is for 286 million euros. The statistics are provided by Finnish customs. 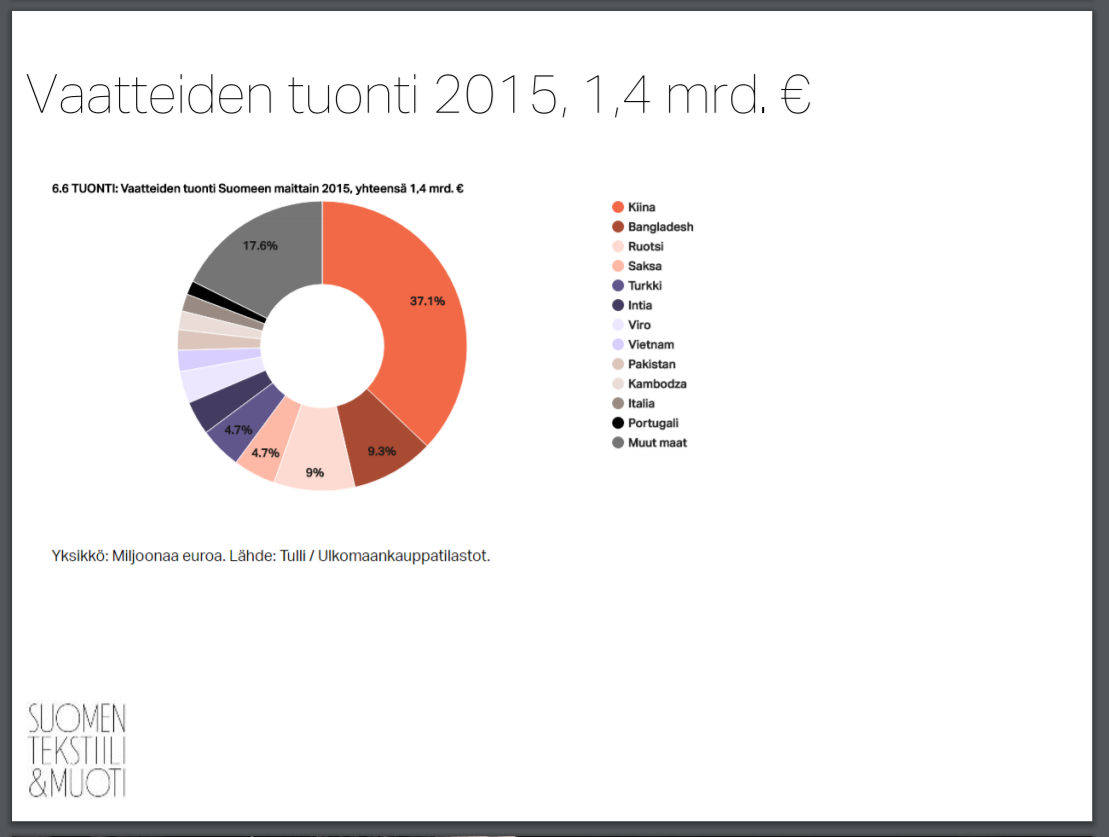 In relation to the exportation, Ruokamo showed us the importation of the clothing goods to Finland in 2015. The countries that we import most from are China, Bangladesh and Sweden. The entire importation is 1,4 mrd euros, so there’s a clear difference in the extent between the import and the export. Also the statistics don’t tell us the manufacturing country, because the customs mark the country of origin as where the goods were delivered from to the customs. As so the goods may have come from a warehouse to the customs and we cannot be sure that the Swedish clothing goods originate from Sweden for example.

Anne Ruokamo also gave us her tips for building a successful brand. She empathized the meaning of a four piece model that consist of product, price, place and promotion. These four points remind us that you need to have the right product, in the correct price, in the right place at the right time. Promotion is also a very important point and it is also the hardest task for Finnish brands, as the building of a brand and a concept is something we need to develop at. /Laura