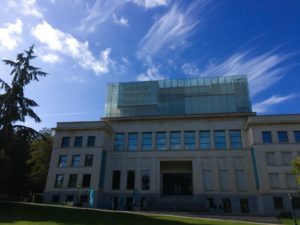 After the visit of the European Parliament we went to the House of European History. The Eastman Building is situated in the beautiful Leopold Part who used to be the Royal Zoological Garden. George Eastman (founder of Kodak Camera) sponsored the House and it was built in 1931 as a dental clinic for underprivileged children and it was finished and opened in 1935. It was transferred to the Museum as an initiative of the European Parliament and opened in May 2007.

The House of European History has seven floors, thus there is a lot to see and experience. There are two different exhibitions; a temporary and a permanent exhibition. The temporary exhibition is situated on the first floor, when the permanent exhibition extends up to four floors. Firstly, the temporary exhibition offers the visitors to interact and be part of the exhibition yourself. It focused on travelling, moving and meeting like the people did in Europe and the exchange and encounters in Europe’s cultural history. Culture was represented in all the parts of the exhibition; it tried to resemble the fact that we and our practices have been developed through culture and everything that surrounds us is affected by it. 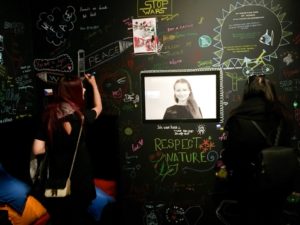 As mentioned before, the visitors could interact in the exhibition themselves. Here’s a picture of two of our students Minna Alahäivälä (left) and Jasmin Westerlund (right) writing their thoughts. This board contained messages from all over the world and the most common writings you could see there were about giving everyone the equal rights and about being proud of who we are and where we come from. This was extremely heartwarming for us to see in this exhibition.

By just stepping in the exhibition, you could feel emotions through the objects and pictures placed around. Everything around you had a story; in some parts of the exhibition, people had given something that reminds them of the war they experienced, and you would get goosebumps of looking at the objects and reading the stories behind them. It was also very nostalgic seeing old computers and the traditions that were held important back in the day. 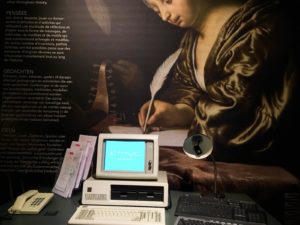 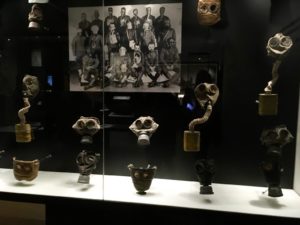 The permanent exhibition had a separate area of the history of the second world war. There were pictures and videos of the citizens, the leaders and the people who fought in the war. This part of the exhibition was a great reminder of what had happened, and it was presented in a way that kept it kept you interested throughout the whole part. In addition, as in the whole House of European History exhibitions the theme was mainly circling around culture, from the war part of the exhibition we could see how cruel the world has been and how we should now keep moving towards equality and humanity. Everything we saw in these exhibitions were truly eye-opening. Also, many objects from the war were placed in this part of the exhibition, such as gasmasks as in this picture. One Showcase held souvenirs and objects that the soldiers found important and which they had to give up when entering the war and leaving their homes, families and life behind them. 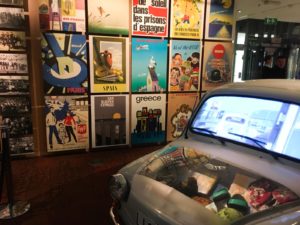