Design Factory and sponsor developing and creating a board game prototype with the possibility to present on stage.

Design Factory provided a unique board game idea for a sponsor’s request, where the game participants would have the possibility to be part of a theatrical experience. The project began with a draft overview of how the game would need to work and what visual features it could and would need to contain.

The first possible options were focused on different creation methods. Being made by printing, engraving, or cutting. These then had their own variety of material options and techniques to choose from. Thus, because of the wide variety of options, which could be implemented to this project. It was decided to first concentrate on the visual design and then afterwards conclude the creation style.

After the designing process was done, it was decided that the base of the game should be more durable than a cardboard version. It needed to be designed in a way that the board could be dissembled into parts, so that the set could fit into a flat box. The visual theme of the game needed to stay similar for example, the cards, chips, structure part and movable characters.

These requirements helped to narrow the options to a certain taste, which the sponsor wished to continue forward with. The conclusion was to laser cut and engrave all the necessary parts for the game from plywood and cardboard. This gave the game set a shared theme and it looked a bit more of a finished product than just a cheaper imitation of an idea. The sponsor had gathered most of the necessary visual material, which were needed for the final engraving process. Afterwards, the only things needed to be added were the specific details, which the laser would recognize as cutting or engraving diameters. 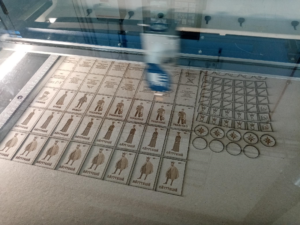 One of the other main parts of the game was the 3 dimensional stage of the theater area. This was designed by 3D modeling and later exporting a vector image for laser cutting and engraving out of plywood. The 3D model later also provided a good visual guide on how the stage object should be assembled.

The last parts of the set were the cards, game character pieces and theater miniature sitting area chairs. Some of which were engraved and cut from plywood and cardboard, and the chair pieces were cut from wood slats. The cards and chair pieces included small tasks and stories, which guide the players during the progression of the game. 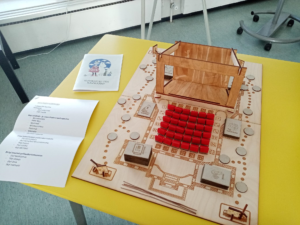