My name is Genrikh Ekkerman and I am an automation engineering student. I am also an assistant researcher at the HAMK Smart Research Unit. Solving complex problems has always been the type of activity I enjoyed. Getting work placement at HAMK Smart was like a dream come true for me, since it allowed me to work with a team of professionals, while tackling complex projects from different areas.

I could not imagine working with such a colossus in my first year of working.

In May 2020 I was preparing to join HAMK Smart as a full-time worker for the summer. At that time I had just finished my student’s internship in the unit.

“Do you know KONE?” – was the question Jukka Pulkkinen asked me when we were discussing work I was planned to do during the summer. Of course I knew KONE, it being one of the most successful Finnish companies on the international market. I knew it since my family moved to a new apartment in 2011 and I saw the word “KONE” every time I was either entering or leaving my apartment.  When I joined the HAMK Smart team as an intern I could not imagine working with such a colossus during my first year of work.

Faster than I could recover from such a mind-blowing opportunity I was paired up with Data Analyst Olli Niemitalo and ready for a trip to the KONE production site in order to observe their production process on the spot.

In my opinion, in real life it is rare that you can just “solve” a problem, quite often you need to “tackle” it. In addition to the theoretical challenge a plethora of unexpected technical, communicative, organizational and legal along with deployment and compatibility problems arise. They range from minor to major and can affect and delay your project in multiple ways. KONE had a complicated optimization task for us, so it was a lot to tackle, but working was as smooth as it could be in a large-scale project like this. It was important that we had great communication with Olli and with KONE representatives and we didn’t encounter a single derailing issue.

Project was finished in 3 months, and those 3 months were the most impactful in my professional career so far.

While visiting the KONE production site it dawned on me how big of a responsibility the task we had in our hands was. Olli was more relaxed, and it was contagious, so I was able to focus on the project along with an impressive KONE factory set-up. I love industrial tourism, so I was quite excited when we got equipped with all the protection gear. Following all safety procedures, we explored the main conveyor belt. When our task was clear, and we started working on the project.

Working on this project proved me how challenges in development go beyond applying the correct algorithm. It gave me a huge amount of insights on working in a professional environment. Project was finished in 3 months, and those 3 months were the most impactful in my professional career so far.

Currently I am working in Smart City project (ÄlyKaupunki). The goal of our team is to develop an optimized control loop for HVAC system, using data from a school building in Tampere. My part is to use Machine Learning methods to make a mathematical model for prediction and control purposes.

”Genrikh possesses two vital traits required to conduct successful industrial data analysis projects: understanding of bigger picture and eye for the nitty-gritty details. He has showed capability of processing large datasets with accuracy while also understanding where the data comes from and what is the result used for”, says Research Manager Olli Koskela

Taking work placement at HAMK Smart was the best experience I could have had during my studies. Not only it gave me an internship and compulsory for completing studies, but also invaluable experience, which is the most important qualification a software developer or an engineer can have. Every student should strive to get in touch with real-time working environment as early as possible.

”Beside strong mathematical capabilities and understanding, Genrikh has the ability to succeed in different projects and with different kinds of people. He has proven this not only on this KONE cooperation, but also on the Smart City project he is working on”, says Jukka Pulkkinen, Director of HAMK Smart Research Unit. 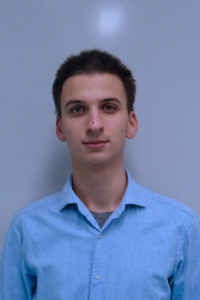