Design student Laivi Kolt is a versatile designer who has experience in designing and making clothes, bags as well as shoes. Her major subject is footwear design. She says she has boldness, craziness, and courage to separate herself from other designers. Her keys for success are positive attitude and problem solving skills.

Laivi, who is from Estonia, graduated from Tavastia Vocational College in 2017 as a shoemaker. After that she wanted to acquire more knowledge about making footwear and grow as a designer as well. She says, HAMK provides a good basis for success and starting a business. For her it has also been an advantage that she can study at a faster pace because her aim is to graduate in two years. At this point it seems she can achieve that goal. 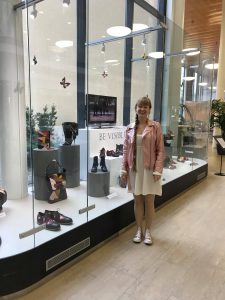 According to Laivi, there have been lots of interesting things during her studies and especially the extent of the degree programme has been a positive thing. Design studies in HAMK gives an opportunity to develop extra broad and useful know-how such as technical and creative skills as well as understanding of entrepreneurship and group work. Laivi says it has been nice to notice how flexible, understanding, and helpful HAMK’s teachers have been.

Creating an own collection and organizing an exhibition

Laivi mentions that the most memorable moment in her studies has been the production process of her latest collection “Be visible” and organizing the exhibition. This process has made her realized what it really takes to organize and build one small display. This whole process took ten weeks which started with the designing of the items. Recycling is important aspect for her and she wanted to use patches of leather on her footwear. Patches gave the shoes a nice, colorful look.

In the exhibition her products were featured in a vitrine which has the best visibility to HAMK’s students, staff and outsiders alike. Laivi wanted also something extra for her display so she put together a video about HAMK, her studies, and making of the “Be visible” collection. In the opening of the exhibition she had three living models to show her products. For Laivi it was really important that the collection and the exhibition really reflected her personality.

Read more about our Smart and Sustainable Design degree programme.