As a vice-chairperson for RUN-EU Student advisory board here in HAMK, I got a chance of a lifetime to take part in the European Student Assembly. European Universities Community (EUC) is a project of European University Alliances, and the Inaugural Session of the European Student Assembly took place in Strasbourg on 3-4 March 2022. I was happy to be selected as one of the 275 students that took part in this.

We – the students – came from 139 European universities and 28 different countries. This assembly had ten panels in which we were divided. Every panel then chose two facilitators to help the panel coordinator to guide the panel towards policy proposal that needed to be presented on 4th March. I had the honour of being one of the two facilitators on panel 6. With my fellow facilitator Jessica Winter and our panel’s coordinator Claire Grard, we accomplished what was needed and did it well if I might add. The topic for our panel was ’How should the European democracy of tomorrow look like?’. I know – not an easy one. But let’s start at the beginning of my journey… 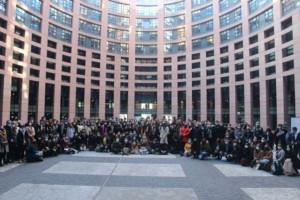 I travelled to Strasbourg via Frankfurt, first by plane then by bus and arrived there a day early. Since I had been travelling almost 12 hours there’s nothing much to write about that day. I wanted to be extra sharp the next day, so I took it easy and went to bed early. The next morning, I made plans to meet up with Jessica so we could meet face to face for the first time and maybe get some work done on our proposal. It was nice to get a face to a name and voice, because we had only met online via videos, which is not the same. I was glad to notice straight away that we had so many similar qualities and our values were the same. This made it so much easier to work together. 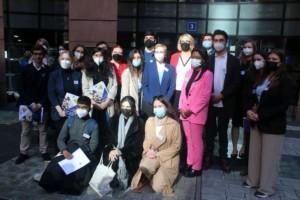 The first part of the actual assembly took place in the European Parliament where Marie-Pierre Vedrenne, a Member of the European Parliament opened the assembly with her encouraging speech and after that we facilitators received the Certificates for the whole panel. Afterwards we had the privilege to visit the European Parliament. The opening conference took place in Strasbourg University, where Constance Chevallier-Govers welcomed us to the assembly with five additional guest speakers. I cannot lie; it was a long day, but it was worth it. After the beautiful performance of the Choir of Strasbourg University, I went back to the hotel. 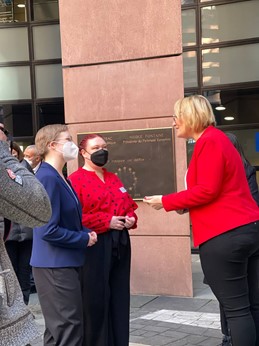 Friday – D-day. I knew it was going to be a long day. I almost had a heart attack because my bus was late, and I arrived at the university at 8.10 instead of 8.00. Now I must clarify that the opening session for the day started at 9.00. But I like to be on time and on our given schedules it was said that the security checks etc. start at 8.00. And because there were almost 300 students, I didn’t want to leave anything by chance. I wasn’t there alone – my fellow facilitator arrived almost at the same time. So funny how the Finnish and German brains work the same. I must say that the opening session on Friday (Roundtable: Rethinking the European democracy through student diplomacy) was really fascinating and memorable. Islam Shalik (far left on the picture down) from EUC moderated and the participants were following (from left to right in the picture): Jean-Paul Jacqué (Emeritus Professor at the University of Strasbourg), Antonio Argenziano (President of the Young European Federalists), Jakub Grodeck (Vice-President of the European Student Union) and Christophe Grudler (Member of the European Parliament). Such an awesome discussion and if I were to pick only one thing to highlight from this panel it must be this – The future starts now. Meaning we cannot continue to only postpone things into the unknown future, we must be the change we want to see, and it must start now. 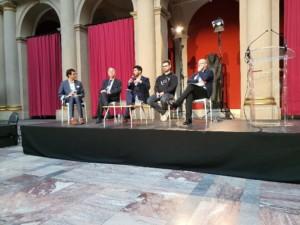 That was only the beginning for one of the longest days I’ve encountered. After that our ten panels started working towards having complete policy proposals by the end of the day. We had only little over three hours to have polished document and a complete proposal ready to be submitted to the European institutions. Although our panel had regular online meetings before this assembly, there was a lot of work to be done. We started by an introduction round to lighten the mood before starting the serious work. First task was to come up with a name for our proposal. Something innovative, capturing, and clear to all. Through democracy we voted by showing our hands on the alternatives and came up with the following title: Transcending together – Towards e-Democracy for the Future of Europe. Following three hours were tough and we (meaning Jessica and I) had to be tougher. Time was at the essence, so we had to push our panel to succeed to the maximum and they did not fail. Everybody did their absolute best, and I couldn’t be any prouder. We had 5 minutes to spare and decided to take a group photo outside to remember this. 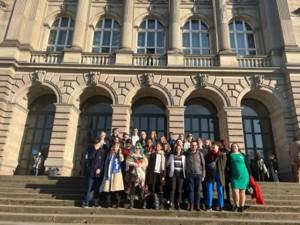 After the working sessions all recommendations had to presented by the group rapporteurs. Our lovely Katarina Tomasevic did such a good job on that. Since I am super proud of our panel’s work, I will list our ten recommendations here: 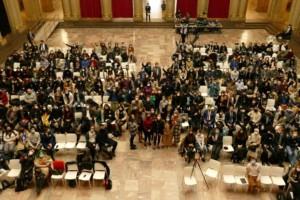 After this plenary assembly there were closing remarks and a farewell dinner. I travelled back home on the next day. This was different from what I’ve ever done because it was such a large entity. Only two days on the site but so much happening. And I was so happy to notice that from my own student alliance – RUN-EU there were 14 students total taking part in this assembly. And even a bigger thing was – we all knew each other; it was like a little RUN-EU family reunion – We are one, we are RUN. I am forever grateful for RUN-EU bringing me these opportunities to interact with my fellow students across the Europe and making a lot of new friends along the way. I gained so much from these two days full of meaningful discussions. Looking forward my next adventure, so stay tuned!